Have Your (Vintage) Cake…and Hate it Too

This past weekend, I was up to my elbows in construction…of the cake kind. 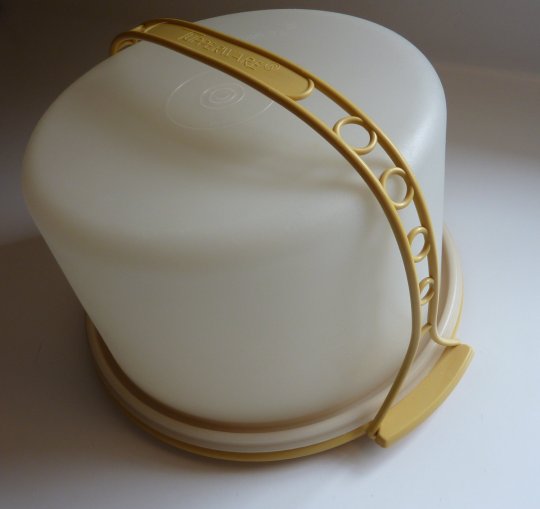 It was my friend Pippi’s birthday, hence my foray into the perilous world of baking a layer cake–a dark and treacherous place I hadn’t ventured near in roughly a decade.

I had conveniently forgotten why I had eschewed the baking of layers.  I’m told this sort of amnesia is common with all horrible things such as delivering a baby and getting one’s bits waxed.  But, all too soon, it came rushing back to me.

First of all, it’s sort of a two-day affair.   And, even though he kindly offered help (he’s a bit of a baking genius) as I embarked on this ridiculous mission, Practical Man knew better than to stick around after I (somewhat snippily) informed him that I was justfinethankyouverymuch.  I mean, why should a simple layer cake be a two-day AND a two-person job?  Especially when one of those people was guaranteed to be better at it and make the other one look really inept even though she was wearing a much better apron?

He retreated to a safe distance and gallantly pretended he didn’t hear his sweet beloved saying bad words in the kitchen.

I’m probably doing it wrong but for me, baking a layer cake takes hours what with the sifting and stirring, alternating the goo with the non-goo, the baking and cooling.  Not so good for impatient sorts, also known as fans of the one-pot-stick-it-all-in-the-oven-at-one-time-and-be-done-with-it type that I happen to be.  I baked the cake on Friday evening after work (during the cheap electricity time so that Practical Man could bask in my frugal brilliance) and then let it cool, cool, cool before I went to bed and had to place it in its moisture-preserving vintage cake carrier overnight.

But, when you’re yawning in your pajamas and ready to sleep, somehow there’s never quite enough greasing and flouring and parchment papering to disengage the cake easily from its cozy pan and I end up holding it upside down while simultaneously trying to crane my neck underneath it to see if it’s detaching.  It’s not, so then I right it, run the knife around it one more time and then invert it again but it’s still not budging so I try shaking it a little and muttering about the inferior quality of flour and parchment paper these days and I am sweating quite a bit on my only trump card–my lovely apron.  Next comes the channeling of Charlie Brown and repeated utterances of “Good Grief!” with more peering underneath and spreading my fingers across the surface of the cake in what I hope is a cake-come-hither kind of way, but that only manages to cause denty fingerprints.  I feel my heart beating in my throat (and very, VERY bad words in my head) as I try to avert the fatal scenario where it suddenly releases in the manner of that awful cheesecake incident of 2012 and comes crashing to the earth in a thousand, crumbly pieces and I have to start from the very beginning all over again.

Stressful, this cake building stuff.  I don’t know how Duff and Buddy and Anna Olson do it.  Of course, they probably have diamond-encrusted swear jars and someone on speed dial to come and cleanse their auras afterward.  But finally, it was safely in the container and I got to go to bed where I snuggled with the baking genius, hoping some of his talent and (somewhat exasperating) patience would rub off on me.

The next day, the fun continued because you see, with a layer cake, the giggles don’t end with the baking.  There’s the building.

Have I mentioned that precision and patience are not really my thing?  I can never quite manage to get Layer One in the centre of the plate and of course, once it’s on there, it seems to have welded itself to the surface as if it’s a person trying to get a baker’s genius to rub off on herself.   I have to estimate how much of the giant pail of icing I’ve made is required to cover the first layer and sides (and that is somehow all over the cupboards and back splash and ceiling) and I always do it wrong (Practical Man is great with spacial tasks like this but there is no way I’m asking for his help because I am justfinethankyouverymuch).  So now, the bottom of the cake is thick with mortar-like frosting and I end up desperately trying to a) get Layer Two lined up so that it doesn’t resemble that famous tower in Pisa and 2) cover Layer Two of the cake with the pitiful remaining 1/2 cup of icing (if only I hadn’t wasted so much on the cupboards, backsplash and ceiling!) and in the end, it looks as if I’m trying to pull off some kind of hideous cake comb over.

But, all that will be hidden by the decorations which consist of M&Ms and mini M&Ms made into flowers.  This is the part for me: creative, pretti-fying and above all, simple.  I can tra-la-la while I make little flowers that reference a simpler, bucolic time of layer cakes and lovely people who don’t curse.   Let’s be honest though, this phase of the never-ending layer cake marathon is really all about rewarding the baker.  M&M on cake.  M&M in mouth.  Cake.  Mouth.  Cake.  Mouth.

I think this is how that amnesia-after-horrible-life-experiences thing starts to work.  You forget about the agony once your brain is plied–systematically–with chocolate. 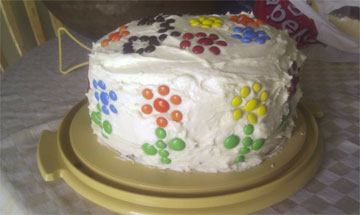 Were I less inclined to the vintage, I might have simply bought a cake, as many modern folk do.  Store-bought cakes  are reliable and built to withstand a minor earthquake (or our drive through the back woods of an Ontario cottage lane to the scene of the birthday celebration).  After all the drama and trauma and dents to my karma, my banana cake with cream cheese icing was L.O.A.

© Christine Fader and A Vintage Life blog, 2010-present. Unauthorized use and/or duplication of this material without express and written permission from this blog’s author and/or owner is strictly prohibited. Excerpts and links may be used, provided that full and clear credit is given to Christine Fader and A Vintage Life blog with appropriate and specific direction to the original content. Thank you!
%d bloggers like this: