This blog title could be an anthem for me and my life.

But, wouldn’t it sound better if delivered with an Alabama accent?  Or, since we’re in Canada, a Newfoundland or Cape Breton accent?

I think I’ll send this to Rick Mercer.  He could really make it into a thing.

You may already agree that I’m four graham crackers short.  I like to pretend that I take after my slightly scatter-brained but completely adored, Great Grandma Hildegard.   She inadvertently invented all kinds of food, including Leathers.   Leathers (as in Roast Beef and Leathers) are a delicious culinary mistake that have thrived through 3 generations of my family.  Signs have been created in homage to Leathers: 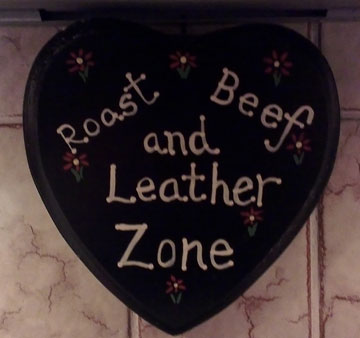 Only in my family…

I should be so lucky with some of my kitchen experiments.

I’ve just finished making a vintage, no-bake dessert to take to Pippi’s dinner party tomorrow evening.   I’m not feeling tip-top, so I took some pain medication earlier which tends to make me even loopier than usual.

Loopy is not good, when combined with the treacherous recipes and general baking chaos that you may remember I tend towards.    The dinner party is among friends and I don’t feel too much pressure so of course, I try something new (which always makes Practical Man pull out what’s left of his hair).

And, after mostly successfully pulling off Scallops Carbonara for the two of us, a few short nights ago (my normally fainty, half-dead heart rate and pulse were through the roof as I “reduced” and “emulsified” and engaged in other scary cooking maneouvers that were way out of my league), I felt bold enough to bake while under the influence of ibuprofen.

Me and Great Grandma Hildegard, circa 1970

In what I imagine to be true baking a la Great Grandma Hildegard fashion, I vaguely remembered the gist of the recipe for “No-Bake, Refrigerator Extravaganza” when I was in town today to pick up the ingredients.  I got home and realized that I didn’t have everything so I skimmed the recipe again and headed back out to the country store, feeling even less tip-top, to try and find instant pudding.

Vintage recipes often contain words like “No Bake” and ingredients with the word “instant” in front of them, have you noticed?

These are the sorts of phrases one often finds in recipes from the 50s and 60s.  Mostly fake, uncooked food was the wave of the future.  When we were living on the moon and relying on our Jetsons-style solar easy-bake oven, these recipes and margarine (not butter) would be the stuff of life!

I am also reassured that in the 50s and 60s, many people seemed to be baking under the influence of alcohol and cigarettes (at least, if you watched MadMen), so a little ibuprofen-induced loopy-ness was barely being authentic to the vintage spirit.

This recipe originated with my aunt and is simple, but delicious and vintage kitschy.  Of course, I didn’t follow the recipe.

It reminds me of the decadence of pot luck parties where you can eat dessert first or have nothing but swedish meatballs for dinner.  But, because I had only skimmed the ingredients, when I got home the second time and started opening can of X and pouring tin of Y, I realized that I STILL didn’t have everything.

I had read the recipe slightly wrong.  Plus, I was sort of amalgamating it with another recipe I’d found online.  Because, I can always manage to talk myself into making things more complicated than they need to be.

Improving 50-year-old recipes, as it were.  Like the ones in this vintage book my friend Shades bought for me,

So, the improvisation began.

And then, I ran out of graham crackers, because I had read the new, amalgamated, Frankenstein’d version of the recipe wrong and was actually using a similar but not requisite ingredient, so I had to improvise again.

Then, there was an emergency phone call to my aunt at the last, dramatic moment.

And now, I have to wait 24 hours to see the result.  To see if four graham crackers short really does wreck a vintage dessert.

At least, I hope.

© Christine Fader and A Vintage Life blog, 2010-present. Unauthorized use and/or duplication of this material without express and written permission from this blog’s author and/or owner is strictly prohibited. Excerpts and links may be used, provided that full and clear credit is given to Christine Fader and A Vintage Life blog with appropriate and specific direction to the original content. Thank you!
%d bloggers like this: