of the 11th month

and I’m gearing up for it. 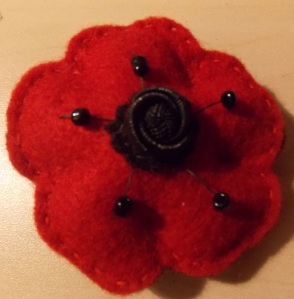 First comes the reading of the stanzas from that famous poem:

They shall grow not old,
as we that are left grow old:
Age shall not weary them, nor the years condemn.
At the going down of the sun and in the morning,
We will remember them.
– Laurence Binyon

I take deep breaths, trying to hold things in.

The singing or reading of In Flanders Fields and the laying of wreaths and the Silver Cross Mother make me sway.

In Flanders fields the poppies blow
Between the crosses, row on row…
– John McCrae

But the hardest part, the part that always makes me lose it, is the standing.  Wherever I am, at 11:00 am on the 11th day of the 11th month, I stand and observe a moment of silence.

I do this, not because I want to glorify war, conflict or nationalism in any way, but rather, out of respect for all the victims of war and those who are called to stand up on our behalf, those left behind and those who return, never to be the same.  Some years, Practical Man and I stand, hands clasped in each other’s, in our living room.  Or in the middle of a store.   He has 20 years of military bearing to draw on.  I am a frequent fainter so I spend a lot of time trying to stay standing as the waves of emotion roll over me.  Some years, I stand, locked in my office at work, the service from the National War Memorial in Ottawa streamed to my computer.

No graceful tears slowly trail down my cheeks.  No eyes glisten like pools of water filling up beautifully on a super model.  No siree.  I am a full on snorting, sobbing, blotchy mess each Remembrance Day.  But that’s okay.  In fact, it’s how it should be.

I think of another poem about how easy it is to turn away when the one being oppressed isn’t ourselves.  The poem’s powerful last stanza reads:

Then they came for me,
and there was no one left to speak for me.
– Martin Niemoeller

Of course, I don’t think that war is the only way to speak against oppression and evil.  Some believe that Remembrance Day or wearing a poppy means supporting the politics associated with war.

It does not.  War is a terrible, awful thing.

Yet, there are still people who volunteer (or don’t have the choice) to stand out front and face evil, bombs, political agendas, greed, death, human rights atrocities, injury and injustice.  In doing so, they also stand up for those who hate and disagree with them, so that those dissenters might live in a world where they have the right to speak out.

I think of my Grandpa Howard, in the tanks during WWII. 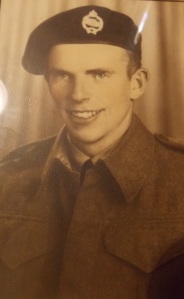 I think of my Grandpa Lou, a paratrooper with the Canada-US First Special Service Force (often known at the Devil’s Brigade). 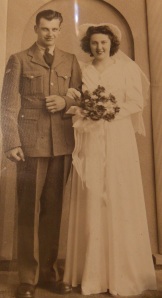 I think of my Grandma Helen, newly married in 1943.   Soon after, she received one of the Missing In Action telegrams that every sweetheart and family dreaded.

My Grandpa Lou had been shot and was in a German prisoner of war camp.  He himself wrote a telegram a few weeks after the MIA telegram, sending his love and asking for cigarettes.   He escaped then got shot and captured again but eventually came home and started a family.

I enjoyed both my grandfathers into my 20s.  I am so fortunate.    Millions of those Grandpa Lou and Grandpa Howard went to fight for and with, were not.

I think of Practical Man, who served 20 years in military service to Canada and his father, Russell, who served in the Korean War.  Russell contracted malaria in Korea and died in his early 30s after routine surgery–possibly of complications from that malaria virus. 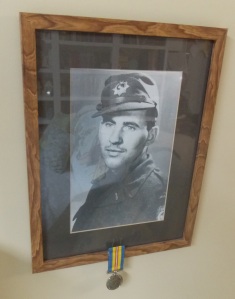 He left five young children and a young wife behind, just as many men and women posted to Iraq, Afghanistan and elsewhere, have done in recent years.  Of those who come back, many face PTSD and other forms of mental and physical illness because of what they saw, did and didn’t do.  Families have to cope without their loved ones for months and years at a time.  Then, they face the challenge of re-integrating a sometimes very different person into their lives.  Those families will never be the same.

Despite what the media sometimes portrays, I don’t think those families are mourning or glorifying heroes.  They are mourning and remembering mothers and fathers, sisters and sons, friends and loved ones.  Regular people, gone or wounded in mind, body or spirit, forever.

My runny nose and red eyes are just a drop in the ocean of sorrow on this day.

As an advocate of peace, I wear a red poppy over my heart each Remembrance Day to honour what all military personnel (past and present) and their families know:  entering war and conflict should be the absolutely last resort.  It is too costly.

I hope we never will.

© Christine Fader and A Vintage Life blog, 2010-present. Unauthorized use and/or duplication of this material without express and written permission from this blog’s author and/or owner is strictly prohibited. Excerpts and links may be used, provided that full and clear credit is given to Christine Fader and A Vintage Life blog with appropriate and specific direction to the original content. Thank you!
Loading Comments...
%d bloggers like this: