“Could you call me Cordelia?”

Such was the plea of literary character, Anne of Green Gables, who disliked her plain name and was often in “the depths of despair”.

I’m not quite in “the depths” (it takes lack of sunshine and being out of ice cream to put me there), but I do get nervous when it comes to naming.  After all, bad name-related things can happen to anyone, in real life and in literature .   Kevin Henke’s loveable mouse, Chrysanthemum, who had always basked in her moniker, had a crisis when she went to school.

Who knew kindergarten mice could be so cruel?

I perhaps do more naming than the average person, although I don’t have children or pets.  I write children’s stories (lots of loaded naming decisions there) and disguise my friends’ names for this blog (lots of amusing naming decisions there) and I have a mini collection of vintage vehicles.   A vintage vehicle has such personality that I think it just naturally begs for a name.

If you think that’s ridiculous, remember, I have named derelict buildings that have tried to kill me and that I’ve known for a mere 30 seconds, too.

So, name the vehicles, I do.  Even though, there are some that advise against it.  They seem to think that

Professional distance is the sensible advice one is given.

But, I’ve never been one for sensible advice.  Even though, I have discovered that naming a car can be more than slightly dangerous to my heart, in case they happen to be lost in a fire.

Still, I persist.  And now, I need your help.

Naming our 1973 Beetle was easy:  it was yellow and white and daisies are my favourite flower. 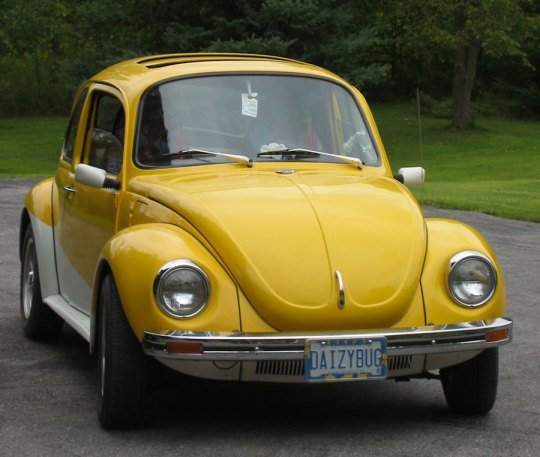 Such a cutie. Gone to the great motorway in the sky.

Our 1974 Boler travel trailer had an obvious in-memoriam-inspired name because it was purchased with the help of our Grandma Helen.

Still deciding on what colour to paint the exterior.

I’m pretty sure her spirit hangs out in the Boler when we’re not using it.

That makes me happy.

Another slight pause for tissues…

Our not-vintage, red, small SUV started off as “The Chariot of Fire” and got refined to “Harriet the Chariot” and now, simply shortened to “Harriet.”

Even Practical Man sometimes goes along with the naming of a practical vehicle.  Especially when an attack deer hit Harriet last year and we nearly lost her, even though she had saved our lives just the day before in a wilderness survival dilemma of mythic proportions.

I really should buy stock in tissues. 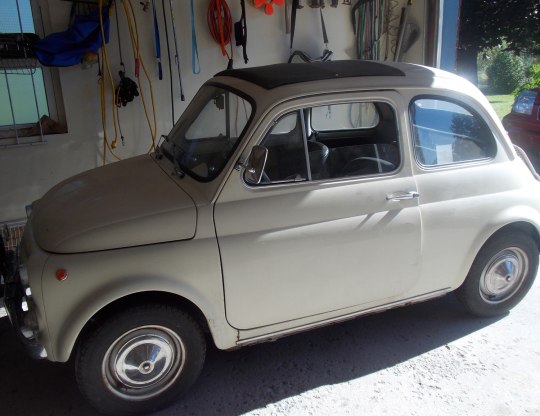 Object in picture is (even) smaller than it appears!

I wanted to pick a name that fit its diminutive size, Italian origins and my lean to the whimsical.

I ended up with Thumbellina, like Hans Christian Andersen’s tiny fairy.  We spelled it deliberately wrong so we could use Bellina for everyday.

But, now that the Fiat has been around for a while, it’s becoming more and more apparent that its name doesn’t quite suit.

It even has alliteration, to which, you may remember, I am addicted.

For the 1970 Fiat, I’m leaning now towards Gnocchi.

It’s kind of shaped like a little gnocchi, isn’t it?  And, I l-o-o-o-o-ove gnocchi.  They’re like eating little pillows of heaven.

Even though, I realize that’s not grammatically-correct Italian.  One car:  but “gnocchi” is plural.

Little pillow (singular) of heaven, then.

Now, I’m befuddled.  Is it low-brow and tacky to change a car’s name after it’s already been anointed?

I don’t know how you parents, with babies to name, can possibly commit.  Should I:

As long as you don’t suggest Cordelia, I’m taking votes.