I had a run-in with The Nature today.

It tried to fool me with its sunshine and lovely temperatures.

And then, it attacked my ankles.

It’s my own fault, really, for not putting on the bug juice that Practical Man pointedly left out for me.   Perhaps it was The Nature’s way of evening the score.  After all, I was yanking and digging grass and weeds out of our flowerbed with some zeal.  That’s probably tantamount to a leg wax for The Nature.  And, it was much too warm today for me to sport my trademark out-in-The-Nature rubber boots.  Mocked by many, my rubber boots have prevented plenty of unjustified assaults by The Nature and I L-O-V-E, LOVE them. But today, I recklessly left them inside and trotted out into the great vampire bug, all-you-can-eat-buffet, brazenly naked around the ankles.

I hate it when things are my own fault, don’t you?

The flowerbed and I have called a cease-fire so I have time to smear myself with liberal doses of anti-itch goo (which is apparently flammable, it says on the label!) everywhere I can find evidence of The Nature’s wrath.  Note to self:  Do not use anti-itch goo while camping and then try to warm ankles by the fire.

Flaming ankles would be much worse than itchy ankles, even I can admit.   You may laugh but, I can’t be too careful.  I come from a long line of accident-prone people (including one person who cut herself, to the point of bleeding, on an onion bun.)

Flaming ankles are totally in the realm of possibility.

On the plus side, before I foolishly headed out into The Nature, we spent the morning wandering yard sales in Westport, a quaint waterside village nearby.  The whole town was having a festive time trading their own junk for their neighbour’s junk, because at a mere 10 or 25 cents for many items, “how could you lose?”  You apparently couldn’t because it was a phrase I heard repeatedly, as we wandered.

I found this and immediately had a crush:

Everyone should have a pink punch bowl with nine matching cups, don’t you think?

Actually, $10 is less a crush and more a commitment for me.  So I hemmed and hahhed for all of three seconds and then someone walked by and said to her friend, “how could you lose?” and I took it as a sign.

You can’t mess with that kind of magic.

I’m not into pedigree, especially when it comes to old stuff.   I just like what I like.  But, I am curious about this.  It doesn’t have any maker markings that I can find.  It seems to have a sort of strawberry pattern to it and it’s heavier than depression glass, although similar in hue.  A search online yielded nothing that resembled it, so now I’m even more curious.  I doubt it’s valuable, I just wonder what vintage it comes from. 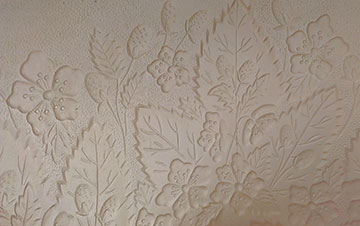 The pattern is slightly raised and bumpy.

Not unlike my poor, poor ankles.

But, at least they’re not on fire yet.