Confessions from the Cusp of Retirement

I am loathe to admit it, but someone I DO. NOT. LIKE. helped me last week.

You could say I was a little desperate.

It all started when I decided to retire from my day job, which means that my dental benefits will stop soon.

You know how retirees always seem to say that they’re “so busy” and they have “no idea how they had time for a job, before”?

Don’t want any cavities to crop up.

Cavities are expensive to us pensioners.

Mind you, I’ve only ever had one cavity before.  But, I scared the pants off my dentist at the time, because I fainted after I got the filling.

And when I faint, I look dead.

My already low heart rate drops to nearly nothing.  My already low blood pressure is non-existent.  My skin looks grey/blue.  More than usual, I mean.

You may have heard of Heroin Chic.  This is Dentist Chic.

And then, people attempt to stick a tube down my throat.

Totally unnecessary, but I guess when you appear dead, desperate times call for desperate measures.

I woke up just in time, tra-la-la.

My dentist looked grey too, after all the excitement but he’s not half dead like me, so no one tried to stick a tube down his throat.

My dentist is retired now.  Recovering from the trauma of doing my filling, perhaps.  Probably brushing, flossing and swishing.  Not to mention golfing, cruising, and travelling (him, not me).

Cavities aren’t great for pensioners but I suspect that they are quite good to former dentists.

Now, I have a new dentist.  He graduated two minutes ago.

I have reached THAT age.

And, horror of horrors, I failed my dental exam.

I had to get two tiny cavities fixed.

On account of the impending loss of my dental plan, the new dentist said I should get them done now, instead of waiting for them to grow up into real cavities.

I wanted to ask him if I should wait for him to grow up into a real dentist, but he had a needle in his hand, so I kept my cavity-filled mouth shut.

Plus, I only have so much time for dental visits, what with all the brushing, flossing and swishing in retirement, you know.  Best to get baby cavities taken care of, now, by the baby dentist.

During the filling, he was very patient and kind with high-maintenance me.

He was very slow to tip the chair back, lest I get my spinny vertigo.

He checked in with me frequently about how I was feeling, lest the “I look dead” fainting was overtaking me.

I didn’t faint, but I’m not too proud to admit that I had to use all my evasive maneuvers to prevent it.

And also, one I AM ashamed to admit.

I’m such a joy to Practical Man.

I’m not the least bit afraid of the dentist or pain or fillings.  And my new dentist, like my former one, is really wonderful.  It’s not his fault that he makes me feel like his mother.

But, my body is a big ol’ drama queen.  The slightest hint of adrenaline and it tells my nervous system to go to DEFCON 5.

So, I ate a big, salty lunch and drank a bunch of water before Practical Man escorted me to my appointment.

I crossed and uncrossed my legs in the chair, trying to pump the blood back to my heart and brain.

I huffed, like a woman in labour, to push my diaphragm so my blood pressure would go up.

I tried to concentrate on the Fixer Upper episode that was on HGTV on my in-flight TV (dental offices have gotten quite fancy, I’m telling you.)

I could feel my heart rate dropping into the Zombie Zone.

There was a loud buzzing in my ears (and it wasn’t the drill).

I was losing my vision (and not just the age-related kind).

And, I was already lying down (the usual advice from onlookers).

I called on the one person I know who can raise my blood pressure.

The person who I find to be an unfortunately extremely visible and powerful, despicable human being.

I thought about HIM.

Not the Harry Potter one.

Lest you think I’m just picking on a politician, my distaste for him pre-dates his current role by decades.

I chanted his name over and over in my head.

Almost immediately, I felt my blood start to boil (or at least, get lukewarm, being half dead as I am).

The point is, it worked.

But now, I need an exorcist.

Who knew retirement was going to cost so much?

My Life as a Jane Austen Character

I scream,  You scream,  We all scream, for ice cream.

So goes the vintage saying, but actually, I scream when I see old Volkswagens (giving Practical Man heart failure, in the process) and occasionally, I scream for cows. Because, they have big teeth and even bigger, hairy tongues.

The other day, I zigged when I should have zagged during lunch and the resulting coughing fit caused my body to try to faint for nearly an hour afterwards.

But, I take medication so I can (mostly) avoid having things like this happen.  That is, if along with the drugs, I live a careful, don’t zig instead of zag, I’m-basically-a-Jane-Austen-character-even-though-I-don’t-wear-corsets kind of life.

Here are the BAD things about being a fainter:

But, like other annoying life stuff, it’s not all bad.  Here are the GOOD things about being a fainter:

I’m almost sure of it.

‘Fraidy Cat with a Fiat

I am not brave.

In fact, I’m fairly sure I can easily be classified as a bonafide ‘fraidy cat.

Cows scare me (all that eye rolling surely leads to stampeding or something ominous with their big teeth.)

Revolving doors give me pause (I do quite enough spinning on my own, thankyouverymuch.)

Even the letter “X” can cause a shiver (seems a bit pointy, at times.)

Like I said, I am not brave.  And I’m a diagnosed swoony, fainty type, so really, I should have been born last century or in a Jane Austen novel.

It’s as if I’m of another era, so maybe that’s why I find myself loving and buying antique vehicles.

They’re not easy or economical or practical (kind of like me).  But Practical Man loves me and I love them, so he overlooks these points.  Not to mention, spends hours and months fixing and maintaining them.

Because, that’s what antique vehicles are for, right?

It didn’t look scary with its chubby shape and cheery yellow and white paint, but it terrified me at first.

You see, the rule is, if you’re a swoony, fainty type:  you can’t drive.

But, I had finally got effective treatment and was allowed, after 15+ years, to get my driver’s license back.  I had to take my final driver’s test and parallel park and blah, blah, blah to get my full license but I am good at tests, so fairly shortly thereafter, we bought the Beetle.  But, my time behind the wheel of any car, let alone one with old car idiosyncrasies, had been very limited.

I remember driving the Beetle back to our house from where we purchased it (about 2.5 scary hours away).  My hands were sweaty, I found myself grinding the gears and shouting things into the wind out the sunroof (bad words don’t count if you shout them into the wind–or in German).  Practical Man drove behind me in the chase car, seemingly unfazed by my driving or bad, German words.  Meanwhile, I was having 17 heart attacks, especially when I accidentally ended up on the Big Fat Scary Speedy Highway.

I screamed the whole time I was trying to merge on to the highway with my 1600 cc engine (and basket of old/new driver insecurities).

Fast forward 10 years and here I am again, nauseated, sweating and in full ‘fraidy cat mode.

But, it makes a very, very expensive lawn ornament.  And, I don’t yet have my glassed-wall garage where I can admire the vehicles from the comfort of our living room.

Hence, the little Fiat must be driven.

Practical Man has been wrestling with the engine on it for a while now.  It got new stuff added by a mechanic and came back broken but, Practical Man used his superior problem solving skills and stick-toitiveness and problem solved and stuck to it until he got it working.

But, it was a false alarm until he used more of his superior problem solving skills and stick-tuitiveness (and possibly some Seafoam in the engine) and now, yes, it is really working.

Except…that means, ahem, I actually have to drive it.

Not just sew it fun seat covers and stuff to hang from the rear view mirror. 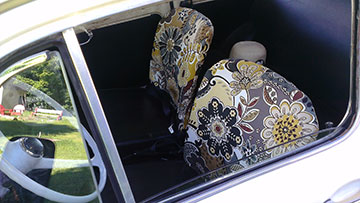 I went out this afternoon on a solo mission.  If that makes me sounds like an astronaut, it’s because I felt like one.

You see, it’s an old and very simple little car. (Not unlike its owner, actually.)

There is no glove compartment or radio or even a gas gauge.

Hedgehug has a very tiny engine (only 2 cylinders), standard transmission (with no synchromeshing so, you need to double-clutch between each gear when you shift), a manual starter lever, a manual choke, and a 1970 gearbox.

Today, I stuck to the country roads and took deep breaths and tried to calm the rapid, fluttery sensation around my heart.  I said nothing in German, but , there was some gear grinding and one stall, as Hedgehug and I tried to learn how to get along with each other.

There will be quite a few more of these days before I am brave enough to grind gears and stall it in the city.   Then, it will be October and time to put it away for the winter.  And come next May and Old Car Goes On The Road for the Summer Day, I’ll have to be brave all over again.

Luckily, I take medication for that now.